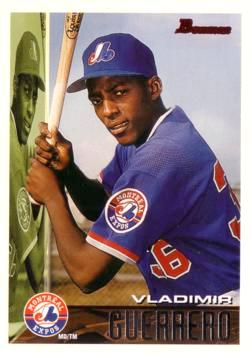 Powell brought up Vladimir Guerrero’s HOF case is the comments section. Let’s expand on that, but let’s preface by looking at the first ballot HOFers in the last twenty years — seventeen in all. The chronological list, along with career Wins Above Replacement (WAR) includes:

As of now, Guerrero is at 58.7 Career WAR. It is very important to note that WAR is just the opening of a HOF case, not the final argument. Career value is just one part, albeit large, of a HOF case. Peak value is another large component, and Guerrero had an excellent peak. However, other than Puckett, Winfield, and Eckersley, Guerrero is dwarfed by those other first ballot HOFers. Eckersley went in to Cooperstown primarily as a reliever, so he probably shouldn’t be included in the conversation. Puckett was a peak candidate, plus he received sympathy credit because of the Dennis Martinez fastball to the head that coincided with the premature end to his career. Winfield was extremely popular with the media — I don’t think Guerrero has had that popularity, although he is well received by the scribes.

Now let’s look at some recent HOF candidates that were not first ballot HOFers — Roberto Alomar (65.3), Barry Larkin (68.9), and Jeff Bagwell (79.9). Alomar went in on the second ballot, and Larkin and Bagwell should go in very soon. However, they had more career value than Guerrero, but weren’t first ballot guys. Alomar was hurt by the spitting incident — some voters refused to vote for him the first time around as a punishment. Bagwell might have received steroid backlash, even though he was never linked to steroids. Larkin’s career was greatly underappreciated because he played in Cincinnati and his injuries.

The key argument for Guerrero is his peak — his career value alone is not a slam dunk HOF case (Kenny Lofton (65.3) accrued significant more Career WAR than Guerrero so far). However, Guerrero’s five best seasons of WAR totaled to 33.8, which is excellent. That peak, combined with his career value, makes him a very strong HOF candidate.

I seriously doubt Guerrero will be a first ballot HOFer. By time he is eligible to be on the ballot, there will probably be a huge backlog of players on the ballot, which will take votes from Guerrero. While his peak was excellent, I don’t know if that will impress the voters enough to put him in on the first ballot. He did win an MVP though and made nine All Star teams, which certainly bolsters his case. Plus, Guerrero’s career isn’t over yet. If he finds some gas left in the tanks, and has a couple of more good seasons, perhaps that will influence the voters to put him in the first time. However, if he languishes for a couple of seasons before hanging up his spikes, that could negatively influence the voters.