December 11, 2012 — the day the UCLA Bruins’ Legend Trevor Bauer became the CLEVELAND INDIANS’ SAVIOR. Word on the street is that Governor Kasich is already calling for an expansion of the Ohio National Guard because he fears the Indians are coming back so fierce that the Iroquois will be resurrected and form an unholy alliance with the British and the Canadians—- an alliance cemented with Hiram Walker. 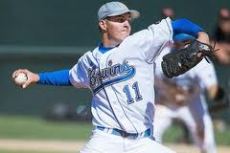 New Manager Terry Francona was overjoyed with the news. “With Alex White, Drew Pomeranz, and Trevor Bauer, we now have a formidable young pitching staff. Drew Stubbs sucks, but we can flip him at the trading deadline to a contender. The future is just that — the future, but it is much closer now.”

When informed that White and Pomeranz  had been traded to Colorado quite some time ago for Ubaldo Jimenez, Francona promptly resigned.