Bill Welke And The Quick Thumb

In today’s Los Angeles Times, Steve Dilbeck referred to MLB umpire Bill Welke as “Quick Thumb.” Fact: Welke’s ejections of Clayton Kershaw and and Don Mattingly were only his second and third ejections of the year (he threw out Jose Bautista earlier in the year for arguing balls and strikes). However, Welke has thrown out thirty guys from the 2005 season through last night, putting him seventh in highest umpire ejections in that time period. His career ejection rate is fifty percent above the norm. “Quick Thumb” fits. 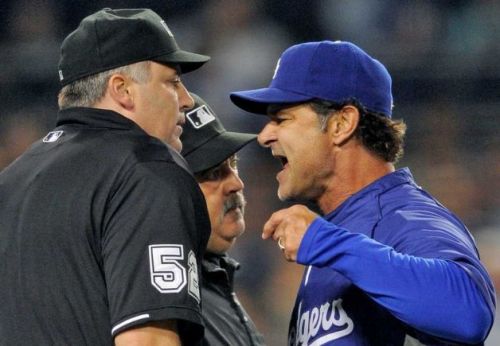 Meanwhile, the Cleveland Indians’ season is collapsing about as fast as the end Bernie Kosar’s career as a starting quarterback. The Indians were manhandled (again) by the Texas Rangers. So far this season, the Indians are 1-8 against the Rangers, being outscored 61-28. Thankfully, the ass whipping will end tonight as the season series concludes. The Indians are expected to reach the .500 mark again sometime in the 2016 season.